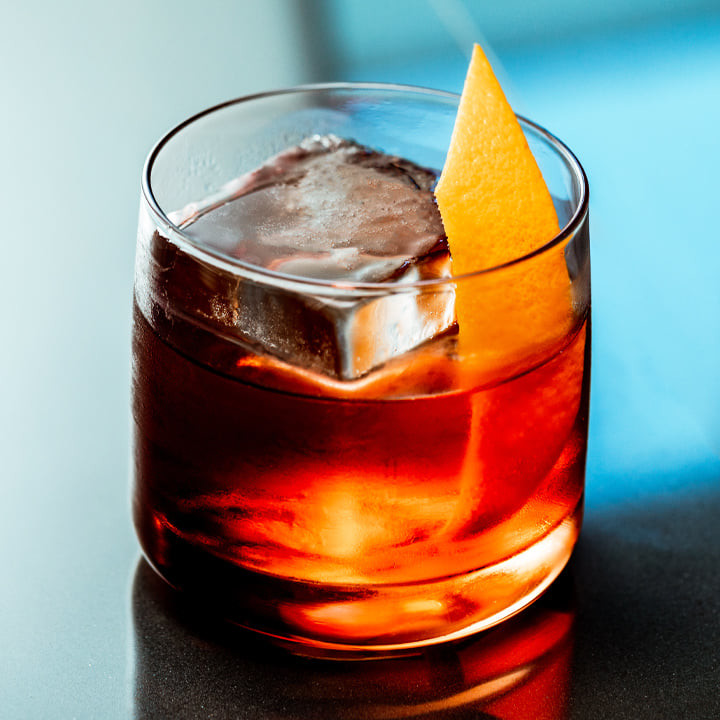 Today I decided to vary a bit and go for drinks instead of food.

I'm a big fan of bourbon. In Lisbon, it's not easy to find good bourbon brands although there are some places with tasty and distinct brands, so when I find a bourbon that I like, I make sure to buy it.
I recently decided to try a recipe for a cocktail that I was given: the Boulevardier.
It was created in the 1920s by Erskine Gwynne, the publisher of “Boulevardier,” the magazine for expats living in Paris in the 1920s. It's pretty simple to do at home and it's great.
The Boulevardier takes the same Negroni formula - a good dose of gin brushed up with equal parts Campari and sweet vermouth - and gives it a twist by substituting bourbon for the gin. As simple as that.
It's ideal for starting dinner with friends or after a meal as a digestive.
Check out the link below, give it a try and tell me what you think. 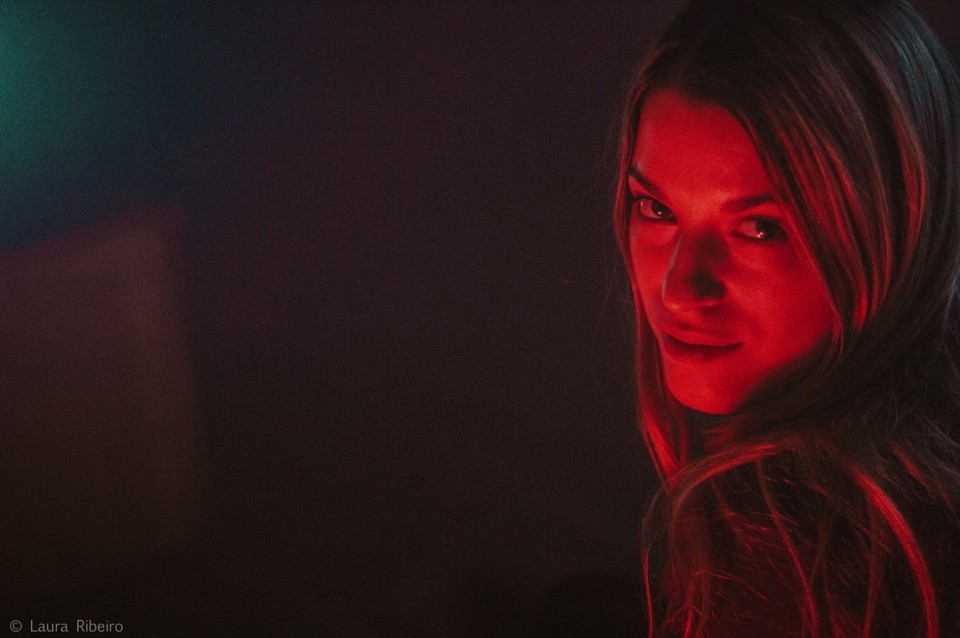 𝐈𝐧𝐠𝐫𝐞𝐝𝐢𝐞𝐧𝐭𝐬 | I had the idea that summer was already over. I was very very wrong, thanks to Sequin, Ana Miró's musical essence. It was last year that Sequin released her second work "Born Backwards" but only now have I heard it and I can confess to you: what was I doing with my time? This album is a pearl of electronic pop, made with love and sadness and a smile on the lips. The clubbing component gives it very unique energy that contrasts perfectly with some of the saddest lyrics. Ana Miró's voice, always harmonious and affectionate, gives us the warm feeling of a good time and. I arrived late at Sequin bandwagon but I got here and I'm really happy about it. You should do it too.

And fuck! What a concert ❤️ 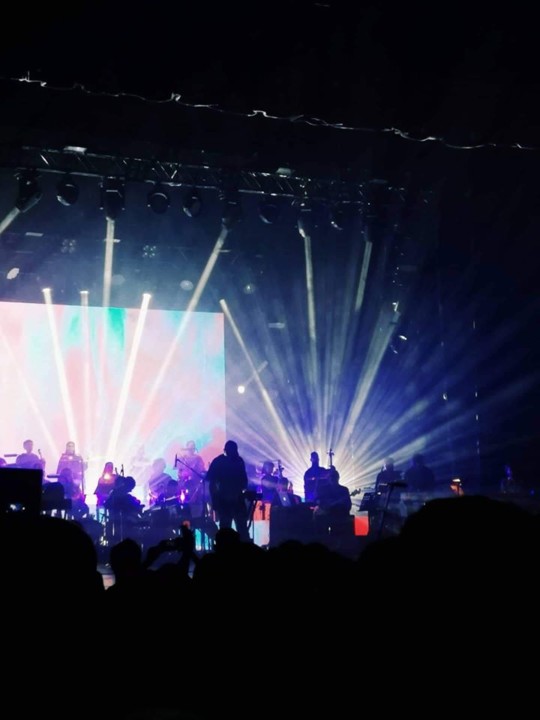 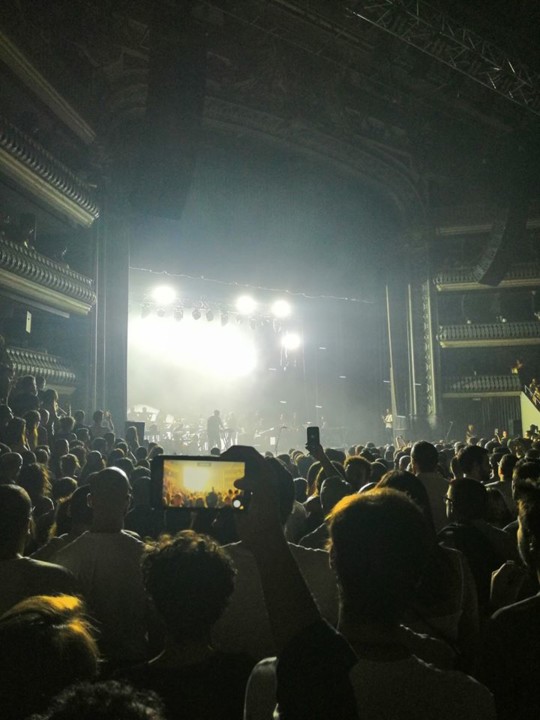 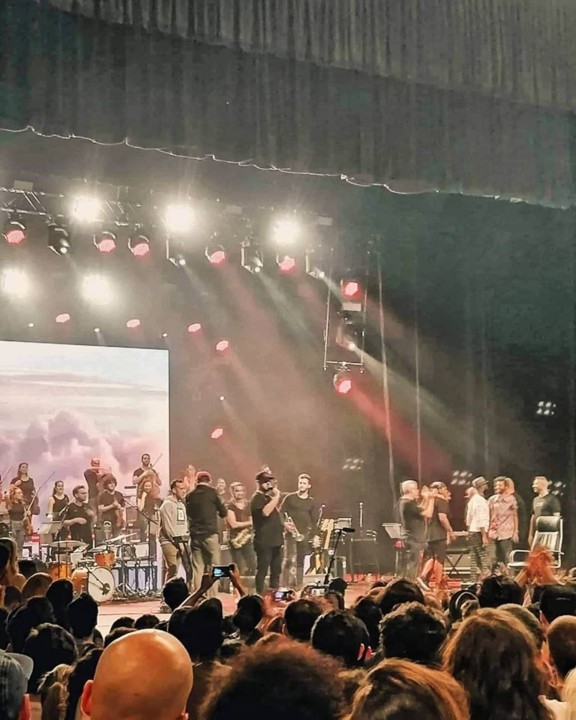 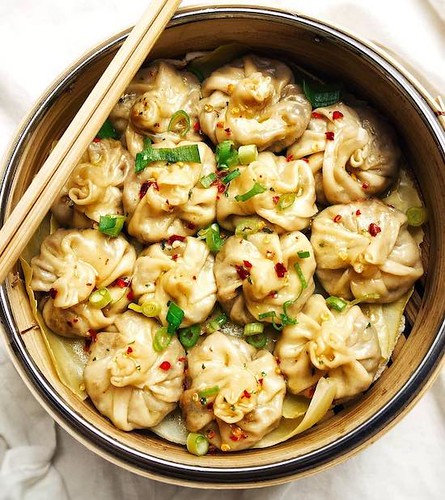 There is still something magical about falling in love with a new artist on a playlist. And if you find an artist you like, probably you're gonna find another. This playlist has some fingers on the pulse of the internet and another in the streets, with songs that have been released this year. Hope you enjoy it! And remember to follow us on Spotify! #soundsandflavours #KitchenSounds

Jungle - Come Back a Different Day

𝐈𝐧𝐠𝐫𝐞𝐝𝐢𝐞𝐧𝐭𝐬 | The band Jungle - led by Josh Lloyd-Watson and Tom McFarland - will steer a new Back To Mine mix, which is set to land on October 18th. The series is backed on an after-hours theme, and it allows the curators free rein to bring in any form of music they like. The band released the first new single in years, directly to this mix. “Put together mostly in the confines of our London based garden studio, where many a late-night gathering has taken place, the mix makes it way through psych, Afro-beat, house and soul with some of our favorite tracks of the moment.", said the group. The mix will feature BADBADNOTGOOD, Mansur Brown, Drumtalk and many others. 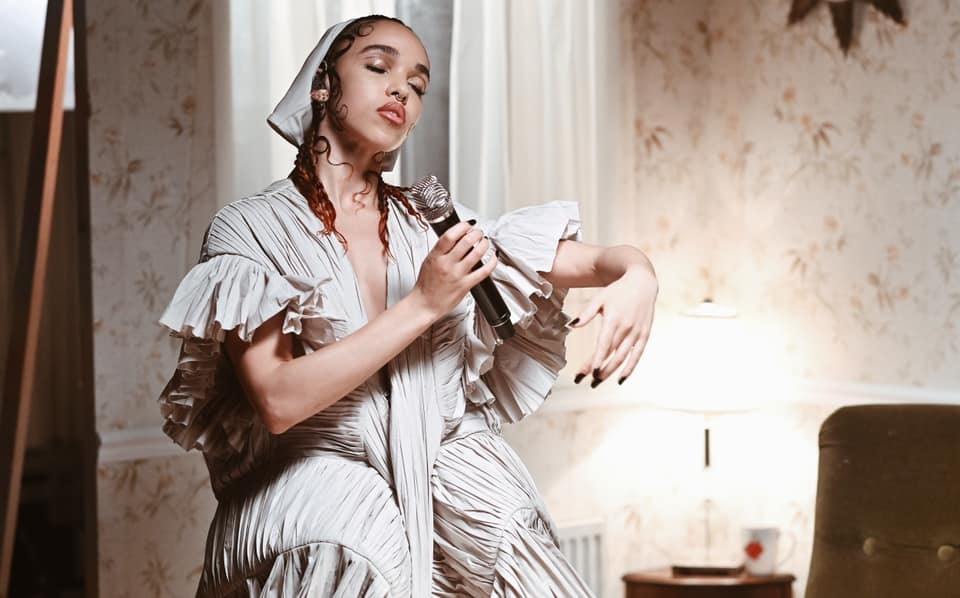 𝐈𝐧𝐠𝐫𝐞𝐝𝐢𝐞𝐧𝐭𝐬 | English singer-songwriter FKA twigs released the next single for her second album Magdalene. The track called “Holy Terrain” has the presence of the rapper Future and it sounds like the pain the singer experienced in the past year has become an intrinsic part of her music. On her Instagram, in 2018, FKA twigs transparently wrote a letter to fans detailing her experience with fibroid tumors and how a “fruit bowl of pain” was removed from her uterus. Described as “eccentric”, “bizarre” and “odd”, in the way she presents herself and her art, she’s just a talented woman who knows and accepts herself, as we should.

Unlike Italian, Japanese and Chinese restaurants, Peruvian gastronomic specialties are not yet massified in Portugal. Eating in a Peruvian restaurant should be a distinct experience and made the most of.

So my expectations were very high when I decided to try Segundo Muelle restaurant, next to Dom Luis I Square in Cais do Sodré. We took advantage of a Time Out Lisboa magazine promotion and set a table for two.

When we arrived at the place, I noticed that I had passed there several times and had never noticed that it was a Peruvian restaurant. It has little reference to the type of food and culture it provides, with a perfectly banal decor, capable of belonging to any type of restaurant. Despite this, we were kindly greeted by an employee who referred us to the table and explained how the menu works.

Organized by the different roots of Peruvian cuisine - Classics, Mediterranean, Oriental, and Native Food - the menu is quite extensive which caused me some doubts about what I wanted to try. I knew ceviche was going to be one of them but what about the rest? With over 30 dishes, it still took a long time to choose. We opted for traditional ceviche to start, followed by tacu tank and tartar de salmón, accompanied by piscos.

While the food was being cooked, we were snacking on chiffles (banana chips fried bread) with aji amarillo sauce (yellow chili, yellow pepper, and lime juice). Delicious. I think I had never eaten banana bread cooked this way. They look like small toasts but with a distinct flavor and mixed with the sauce, they are delicious.

The first dish to come to the table was ceviche, the best known of all but also the one for which I had the highest expectation and I can say it was on point. The fish, soaked in tiger leche and mixed with the red onion, chopped coriander, and corn, had the delicious, sharp, refreshing flavor. Seconds later Thin onion strips. It was the first jolt of textures and pleasurable pains. 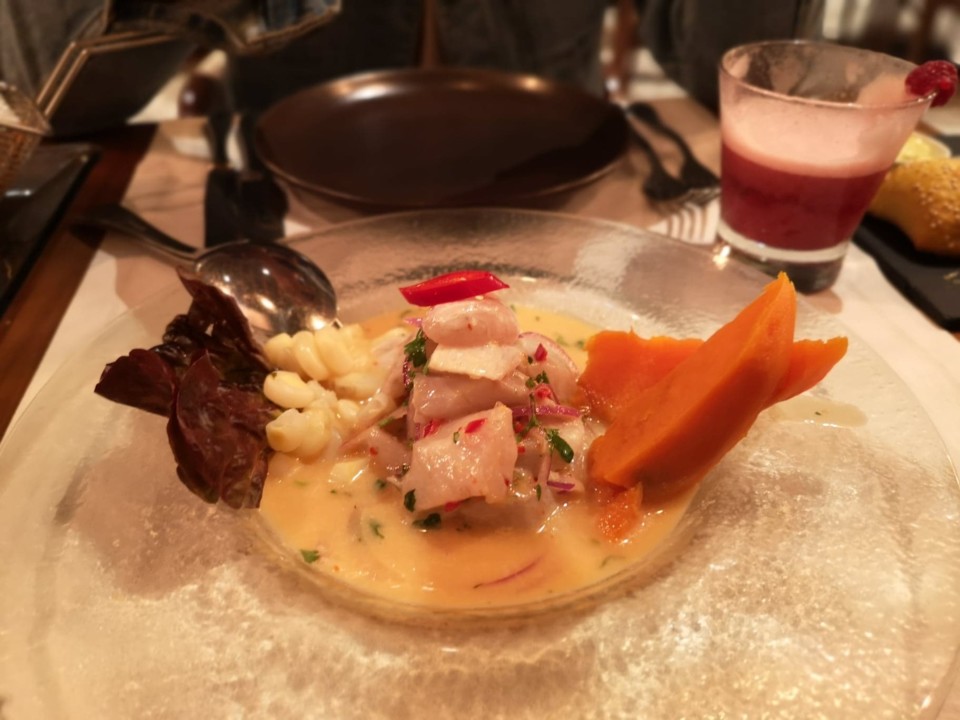 The tank tacu left much to be desired. It was not at all a dish that pleased me. The intense flavor of the banana, mixed with the rice and beans base, still with salmon sauce, made me feel too nauseating. It was a wrong choice on my part that made me disillusioned after such a good start. 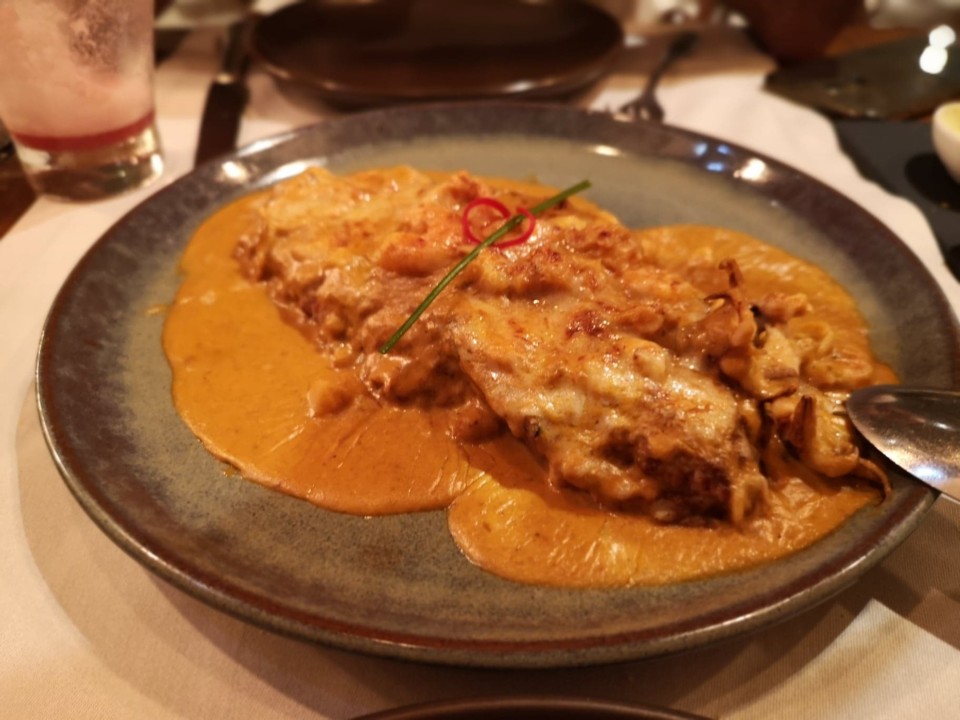 Finally, the tartar of salmon did not leave me with great memories either. I felt I had tasted better at home. The quality of the salmon was undeniable, mixed with small avocado pieces previously marinated in olive oil, garlic, and lime. It's a fairly easy dish to cook at home and for 13 € I expected something a little more distinct, more irreverent. Again, not bad. It was just normal. 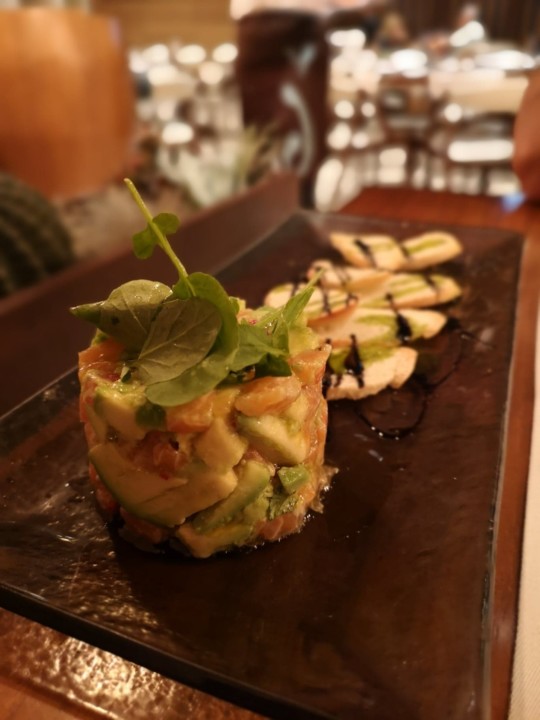 In the end, what I felt was that the experience did not live up to expectations. The menu is too extensive, the decor leaves a lot to be desired, which made some negative impact on dinner. The food is good but I don't think it's worth the money we paid.

Segundo Muelle is a successful restaurant - 18 restaurants spread across six countries: Peru, Ecuador, Costa Rica, Panama, Spain and Portugal - which is in our country through a partnership between creator Daniel Manrique and the Portugália Group. 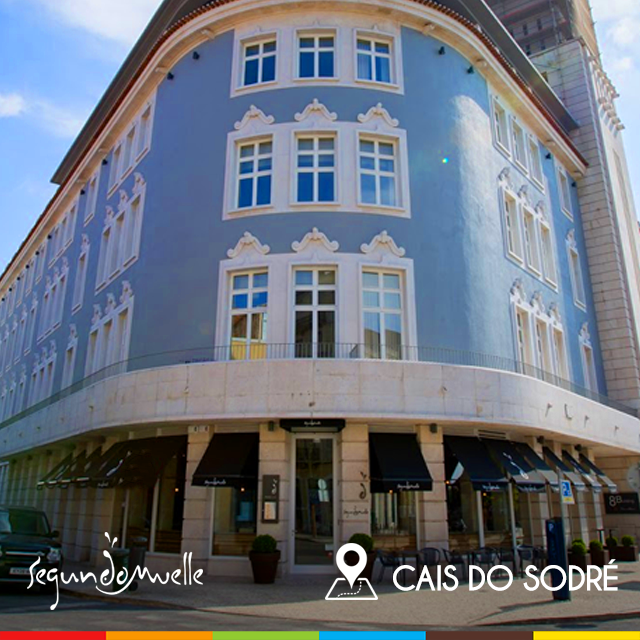 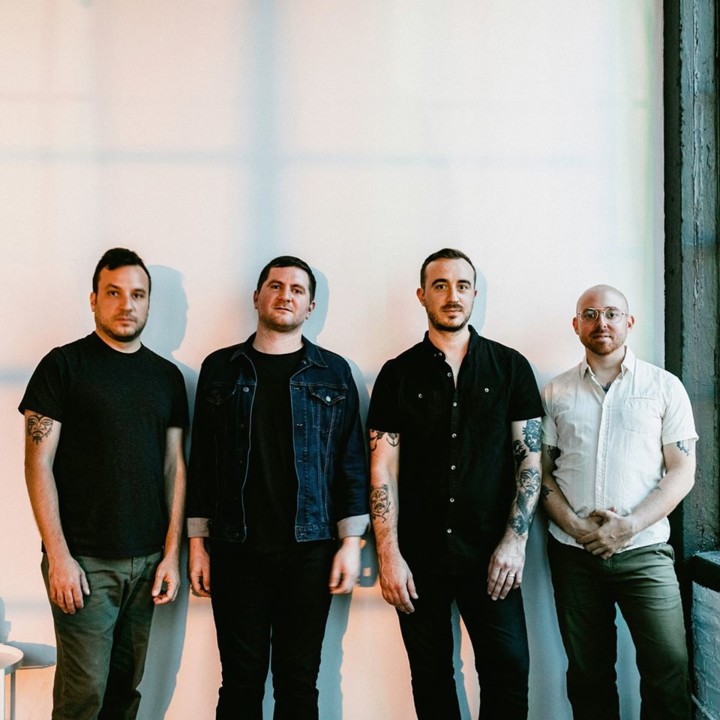 𝐈𝐧𝐠𝐫𝐞𝐝𝐢𝐞𝐧𝐭𝐬 | For the past 12 years, The Menzingers have been one of the most consistent and interesting bands from the city of Philadelphia. With six albums released - the latest being this "Hello Exile" – the group members have reached an age where they seek to navigate the circumstances of their early 30s, creating easily related songs that tackle themes that plague us all like loss, failing relationships or the ever important power of friendship. This album is one of the major releases of this year. It has played several times on my Spotify. Between moments that sound like Springsteen and others who sound like arena-worthy chants, The Menzingers are rapidly becoming one of my favorite bands. 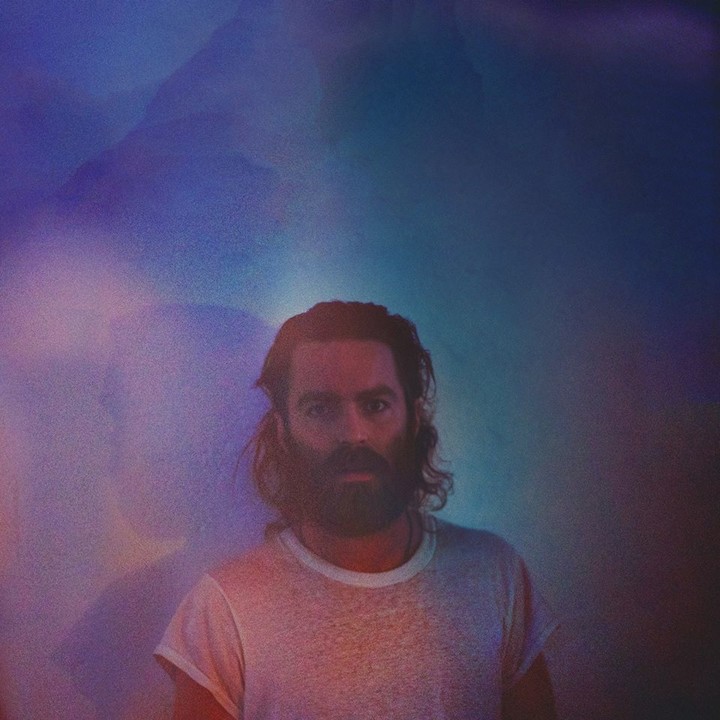 Yesterday I had the opportunity to go see Nick Murphy fka Chet Faker in Lisbon and wow, what a concert.

The artist who was previously responsible for Chet Faker took the stage at about 10:15 pm in front of a sold-out room waiting for the Australian musician.
“My name is Nick Murphy and I'm going to play a series of songs that I wrote during my brief existence on this planet,” he said.

Leaning on the recent album "Run Fast Sleep Naked", the musician breezed through songs such as "Hear It Now", "Harry Takes Drugs On The Weekend", "Dangerous" and the single "Sanity", not forgetting the musical pearls that made him world-famous like "Gold" or "1998".

One of the moments of the night was the naked version of "I'm Into You" that led Nick Murphy to sing, alone, at the piano, in a room listening to every word.

It will be in my memory the amazing "Birthday Card", one of the songs in which Nick shares stardom with Marcus Marr. It's a pearl of any dance floor (or a party worthy of the name).
More experienced and more introspective, the Australian singer found a new musical path and left behind Chet Faker's persona, which brought him so much success.

Still, it's a journey everyone has to make. It's evolution baby.